What children are afraid of according to their age

Children's fears are different according to the age of the children. Some remain over the years and others, however, appear and disappear as the child matures. For example, it is not the same the fear that a baby feels, more related to new discoveries and what is still unknown, than the one that a 1

Children's fears are different according to the age of the children. Some remain over the years and others, however, appear and disappear as the child matures. For example, it is not the same the fear that a baby feels, more related to new discoveries and what is still unknown, than the one that a 12-year-old child can feel, that have much more to do with their social environment and responsibility. .

Find out what children are afraid of based on their age. This graphic chart will help you to follow the evolution of the fears of children by age.

Find out what children are afraid of according to their age 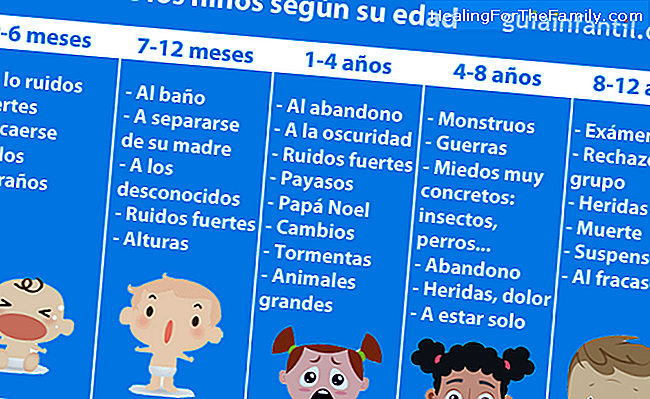 Fears change with us throughout our different evolutionary stages. In children, they are very present since they are born, but they are different as they grow. We explain what children are afraid of according to their age:

- From 0 to 6 months: During this stage of attachment, babies feel a strong bond with their parents. They feel protected and everything around them is strange and poses a threat to them. Therefore, in the first 6 months, the most common fears are fears to strangers, but also loud sounds that may startle them. They may also be afraid of falling, as they are still fragile and need to feel safe both emotionally and physically.

- From 7 to 12 months: Babies begin to crawl, to stand up, to investigate the world around them. It is a stage of exciting discoveries for them, and yet new fears are generated. For example, they still need the protection of their parents. They need to feel safe at their side, and they begin to fear that they will disappear. It is the stage in which most 'miss'. They do not understand that their parents disappear and reappear hours later. They think with horror that they are abandoned. They also continue to scare the loud noises, and begin to feel other types of fears to external stimuli. For example, to the bathroom. In many children of this age also begin to give themselves the first fears of heights.

- From 1 to 4 years old: The bond with parents is still very strong. They have not yet fully developed the necessary autonomy, and that is why they continue to fear abandonment. They also generate many other fears that are very common in children, such as the darkness, a fear that can accompany them for many years, and even last until adolescence.

There are very different fears at this stage, which depend on each child: loud noises, clowns, TV or fictional characters with strong colors that frighten them ... Large and strong animals and storms, for the noise generated by the thunder. In addition, for the first time children begin to feel fear of changes.

- From 4 to 8 years old: At this stage, the child is more independent and begins to give more importance to their social relationships. Suddenly he listens to news and sees images on television that he does not understand and they shock and frighten him. The first fears are given to wars, attacks, death and pain. He is also afraid to stay alone. And above all, the most common fear at this stage is to monsters and supernatural beings, such as zombies, vampires or ghosts.

- From 8 to 12 years old: The child finally understands that his parents are not going to leave him. That fear disappears. It also abandons previous fears such as fear of loud noises or monsters, since at the end it understands that they do not exist. However, other deeper fears begin to be generated, related to their social environment and the responsibilities they are assuming. Suddenly they feel afraid of being rejected, of their physical appearance, of failure, of defrauding their parents, of suspending an exam ...

As you can see, the fears evolve along with the children. Many of them, if they are not located and treated in time, can last as adults.

Previous Article How to deal with the sexual education of children
Next Article Fable with moral for children: The teacher and the child Tips for traveling to Prague as a family How to draw a rocket. Transportation drawings for children Children with slow pace of learning Crafts to congratulate on Father's Day