Eleuterio is a name for a child of Greek origin that means "freedom". It is one of those names of exceptional beauty that, nevertheless, has not finished curdling among popular tastes. In any case, Eleuterio has all the characteristics of musicality, meaning and tradition that your child needs. He c

Eleuterio is a name for a child of Greek origin that means "freedom". It is one of those names of exceptional beauty that, nevertheless, has not finished curdling among popular tastes.

In any case, Eleuterio has all the characteristics of musicality, meaning and tradition that your child needs. He celebrates his name day on April 18, which is the day of San Eleuterio. 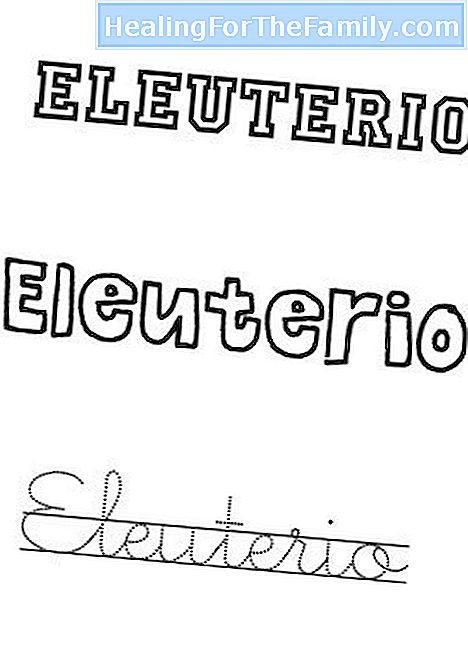 Curiosities about the name Eleuterio

Due to the meaning of his name, Eleuterio has a free and adventurous spirit. Of restless character, Eleuterio possesses extraordinary intellectual gifts, something that does not prevent him from being at the same time sociable and admired by his charisma. In addition, Eleurerio is generous and altruistic, of a nobility and loyalty that does not go unnoticed. Struggling in any task he undertakes, Eleuterio achieves success and does not hesitate to share it with his friends.

The name Eleuterio is known in all languages. Although it does not currently enjoy much popularity, it is a name loaded with positive connotations that are immediately transmitted to the person who carries it. In Spanish-speaking countries, Eleuterio has spent many decades in oblivion, but it may be one of those names that re-emerge strongly in the coming years. For its part, in Greece, the name of your child is kept topical.

It is precisely from Greece that we get important personalities that bear the name of your son. Eleftherios Venizelos was the most important politician in modern Greece, the former Prime Minister and the one who gave his name to the current Athens airport. Its feminine variant is found in the singer Eleftheria Arvanitaki, who has managed to bring popular Greek music to all corners of the planet.

Nearer, but also more prosaic, we find in Spain the figure of Eleuterio Sánchez, El Lute, famous prisoner and fugitive who starred in countless legends in the 60s. Later he became the paradigm of the iron will and "nothing is impossible" when he managed to become a prestigious lawyer after his long stay in prison.

To know the origin and meaning of other names that celebrate their saint in the month of April, consult our calendar of the names of saints in April. You will find all the curiosities related to the name and date of your name day. The incorporation of the iPad in the classroom

Tips for parents of twins or twins What is autism in children and what is their origin Decorate the baby's room. The curtains Why there are children who need more affection than others Short stories in verse for children The horse and the boar. Phaedrus 'Fables for Children The worthy rat. I have values ​​for children