Monuments for children on a trip to Brussels

Brussels is a very pleasant city to walk and enjoy. It is the greenest European capital, with the highest proportion of green areas: 28% per inhabitant, which is a huge stimulus when traveling with children. Monuments for children in Brussels Brussels is also marked for hosting the headquarters of t

Brussels is a very pleasant city to walk and enjoy. It is the greenest European capital, with the highest proportion of green areas: 28% per inhabitant, which is a huge stimulus when traveling with children.

Monuments for children in Brussels

Brussels is also marked for hosting the headquarters of the European Parliament and Commission, as well as that of NATO. A walk through this area is also a highly recommended activity to discover the contrasts of the city.

The large structure of nine steel spheres is the symbol of Brussels. It is impossible to plan a trip to the capital of Belgium and not take a picture in front of the Atomium.

Originally thought of as a temporary sculpture for the 1958 World Fair, the structure became permanent and became one of the main tourist attractions in the city.

The Atomium is also a visit that children like a lot because from the spheres open to the public you get nice views of the city. In addition, the long colorful escalators and the glass-roofed elevator delight the little ones.

Located next to the Atomium, Mini Europe is an exhibition of 1/25 scale models that show the most famous corners of Europe in miniature. The Big-Ben, the gondolas of Venice, the Greek Acropolis and up to 350 European monuments come together in a visual and sound show.

Numerous animation games help children learn more about different destinations in the world: surprise yourself with the eruption of Vesuvius, break a piece of the Berlin wall or take off the Ariana rocket as you walk around the Mini Europe park.

Brussels is the city of comics par excellence. The city that gave birth to Tintin shows on the facades of its buildings numerous murals inspired by the most famous characters in the comics.

Therefore, an original way of touring the city is through the fun Comic Book Route or the mural art movement: an itinerary through 50 giant frescoes painted on the walls of the Brussels neighborhoods.

Discover Bill and Bolita, Tintin down a staircase after Captain Haddock, or Spirou, two steps away from Mini-Europe. A fun journey ideal for the little ones. 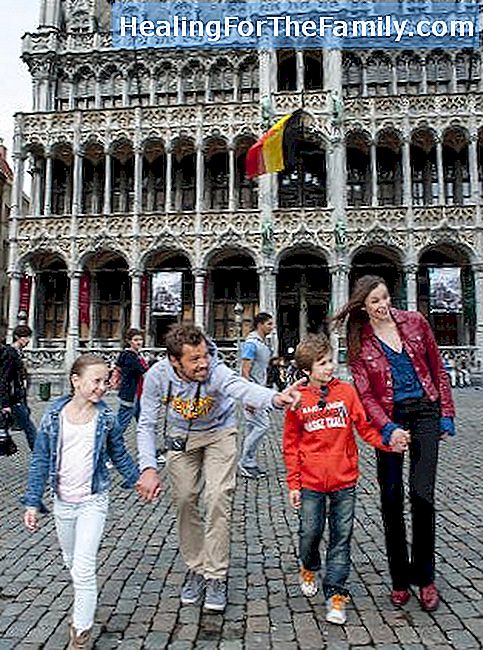 In this square, the most interesting old buildings of the Belgian capital are concentrated in a perimeter of human dimensions.

Next to City Hall there is a bronze statue of Everad't Serclaes. They say it's good luck to touch the arm of the statue, so do not leave Brussels without doing so.

This 50-centimeter figurine shows a naked child urinating in a fountain. A funny image that has become one of the most beloved corners of Brussels. Manneken Pis is located next to the Grand Place and is always surrounded by curious tourists.

In 1698 a political personality wanted to make a curious gift to the city and delivered a piece of clothing to cover the Manneken Pis. The gesture seemed so nice that since then many other presidents of Government who travel to Brussels, come with a suit or pledge as a gift. The Museé de la Ville shows about 650 items, including a bullfighter's outfit and Elvis Presley clothing. On special occasions, the City Council dresses the original statue with one of these garments.

Palace of the Cinquantenaire of Brussels

To the east of the Cinquantenaire Park is the Palace of the same name, one of the architecturally most representative buildings of Brussels.

Its most emblematic part is the triumphal arch or bronze quadriga that is very reminiscent of the famous Berlin Brandenburg Gate.

Built to celebrate the 50th anniversary of Belgium as an independent nation, this Palace hosts three museums: the Museum of the Fiftieth Anniversary, the Museum of Military History and Autoworld, a monumental exhibition of vehicles from all eras.

Previous Article Travel to Dublin with children. Guide for the whole family
Next Article Shopping in London for children How to make the child lose the fear of the plane Educate in values. The example The test of the curve detects gestational diabetes Stye in children. Causes and symptoms How to draw an owl

The benefits of chocolate in children The reflection of the bird. Children's poetry with rhyme Children who talk too fast