Ambrosio is a name for a child of Greek origin that means "immortal". Although today it is not widely used, it is a name that imprints a great strength of character to every child that carries it. Closely related to Greek mythology, the name Ambrosio has undeniable connotations of eternity. He celeb

Ambrosio is a name for a child of Greek origin that means "immortal". Although today it is not widely used, it is a name that imprints a great strength of character to every child that carries it. Closely related to Greek mythology, the name Ambrosio has undeniable connotations of eternity. He celebrates his name day on December 7 que, which is theday of Saint Ambrose , Bishop of Milan.Curiosities of the name Ambrosio

Given the strength of the proper name, children who are called Ambrosio usually have a personality charged with duality. Thus, Ambrosio is tender at the same time as energetic, impulsive at times and reflexive at others, and he tends to bet strongly on everything he believes in. In any case, it is a sensitive person, lover of freedom and independence. 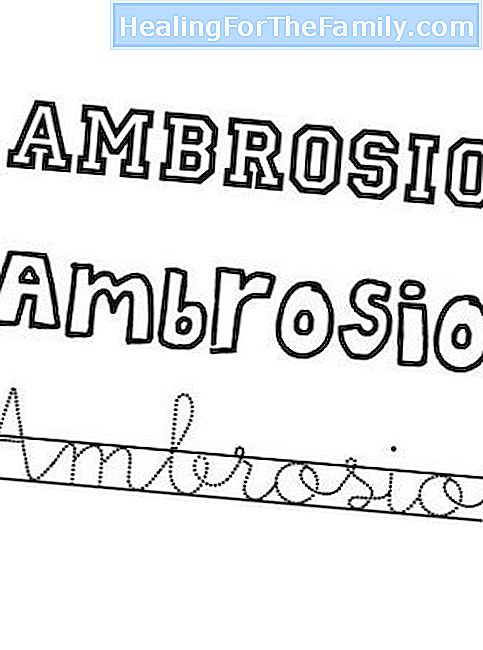 We find the name Ambrosio all over the world and, in case you find it a little outdated, you have the Catalan version

Ambròs , which is very attractive. In French the name Ambrosio isAmbroise and in English Ambrose , while the version of the name in Italian, which is in the language that most uses this proper name, isAmbrogio . Its female variant isAmbrosia , a name for a girl that came directly from the Olympus of the Greek gods.And that immortality that implies the meaning of the name Ambrosio derives directly from "ambrosia", which in mythology was neither more nor less than the food that the Greek gods ingested to keep intact their immortality. Along with the nectar, the ambrosia constituted the only food of the gods of Olympus and on which they depended to obtain their supernatural strength.

We are, then, before an ideal name for your baby, which will accumulate all the strength of history in its character, because Ambrosio is the name of painters and writers, but also of scientists, statesmen and explorers. A name that will lead your son to defend his ideals at all times.

If you want your child to learn to write his

name Ambrosioin calligraphy and also can color it in uppercase and lowercase letters with the colors that you like, just click on the name Ambrosio to print its beautiful name.To know the origin and meaning of other names that celebrate his saint in the month of December, consult our calendar of the names of saints of December. You will find all the curiosities related to the name and date of your name day. Ideas to teach math to children with LEGO 5 Strategies to help the insecure child The giant crocodile. Poetry with rhyme for children What is a hurricane and how is it formed